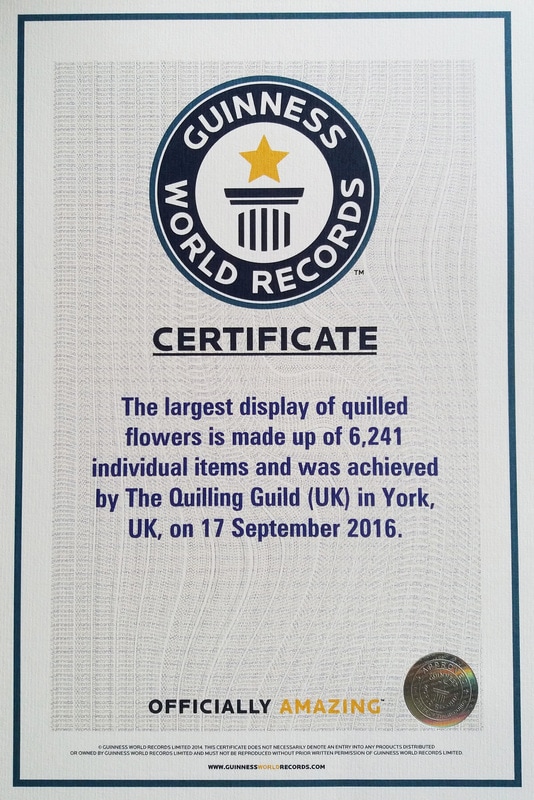 THE QUILLING GUILD SET A NEW WORLD RECORD in 2016!

The Quilling Guild succeeded in its attempt to achieve an official World Record for amassing the greatest number of quilled flowers in one place in 2016, following industrious quilling activity by members and friends from across the world over a two year period.

The resulting collection of 6241 flowers formed a spectacular display at the Guild's Celebration Weekend which was held at The Folk Hall, New Earswick, York, on 17th September 2016.  The official count of the flowers was undertaken at this event in the presence of three independent and highly respected witnesses: the Sheriff of York, Mr Jonathan Tyler; the Sheriff's Lady, Mrs Brenda Tyler and expert quiller Doreen Strachan.  Following the count, the agreed total was submitted to GUINNESS WORLD RECORDS™ for official authentication, accompanied by photographic and video evidence.

GUINNESS WORLD RECORDS™ responded in December 2016 with official confirmation that a new Record had been set.

The flowers are subsequently going 'on tour' in the UK where they will be displayed at various festivals and events, helping to raise public awareness of the art of Quilling.

Congratulations and thanks to everyone who contributed!